The regatta will be governed by the rules as defined in The Racing Rules of Sailing for 2017-2020, including the prescriptions of US Sailing (the “RRS”), the rules of the International Sunfish Class Association, Inc. (ISCA) and the Notice of Race except as any of these are modified by these Sailing Instructions.

Notices to competitors will be posted on the official bulletin board located on the outside of the Lake Bluff Yacht Club compound.  Information will also be available at www.lakebluffyachtclub.org.

Signals made ashore will be displayed from a flagpole near the compound located on the beach. If a postponement is signaled ashore, the warning signal will be made not less than 45 minutes after AP is lowered. Boats are requested to stay ashore during the postponement period.

1100 hrs Warning for Race #1 with additional races to follow.  Lunch on the water.

1600 hrs No Warning signal will be made after this time

1430 hrs No Warning signal will be made after this time

The class flag will be a flag with a Sunfish class emblem.

The racing area will be on Lake Michigan, directly east of the Lake Bluff, IL South Beach as conditions, in the judgement of the Race Committee, allow.

8.1 The courses will be Windward-Leeward (W), Triangle (T),  or a combination thereof (Olympic (O)) as diagrammed on Attachment A at the end of these Sailing Instructions.

8.2 A placard or board with the course W, T or O with number of legs will be displayed from the Race Committee boat prior to the Warning Signal for each race.

8.3 When there is a gate, boats shall sail between the gate marks from the direction of the previous mark and round either gate mark.  In the event that a gate is not in place, the single leeward mark shall be left to port.

8.4 Leeward gates may be used at the discretion of the race committee. If used they will be announced prior to the warning signal for the race either verbally or on the course board, or both.

9.1 Course marks will be orange tetrahedrons. The windward offset mark will be a red buoy.

9.2 New marks, as provided in Instruction 12, will be red buoys.

10.2  In the event of a general recall of a race, the restart shall automatically be under RRS 30.3. U Flag Rule, regardless of whether or not the U flag has been displayed. This changes RRS 30.3.

10.3 The starting line will be between an orange flag on the Race Committee boat on the starboard end of the line and a buoy on the port end of the line.

In accordance with Appendix U, Audible-Signal Racing Signal, the Race Committee will signal individual recalls by hailing individual boats over early. The failure of competitors to hear or understand the hails, the timing of the hails and the order of the hails will not be grounds for redress.  This changes RRS 62.1(a).

When the race committee changes the leg of a course, the new mark will be a red buoy. When in a subsequent change a new mark is replaced, it will be replaced by an original mark.

The finishing line will be between a staff displaying an orange flag on a race committee boat, and the opposite end finish mark.

Rule V1, Penalty at the Time of an Incident, of Appendix V, Alternative Penalties shall be in effect.

16. PROTESTS, ARBITRATION, AND REQUESTS FOR REDRESS

16.1 A boat intending to protest shall notify the protestee immediately as well as the Race Committee promptly after the finish of the race as to her intent to protest and the identity of the protested party.

16.2 Protest forms are available at the beach shelter. Protests shall be delivered there within the protest time limit.

16.4 Notices will be posted within 30 minutes of the protest time limit to inform the competitors of hearings in which they are parties or named as witnesses. Hearings will be held in the Jury Office in the beach shelter beginning 30 minutes after the end of protest time, as posted on the bulletin board.

16.5 Notices of protests by the race committee or the jury will be posted in the compound to inform boats under RRS 61.1(b).

16.6 For the purpose of RRS 64.3 (b), the "authority responsible" is the measurer appointed by the race committee.

17.1 The low point scoring system of Appendix A will apply, except as modified as follows:

(a) When fewer than six (6) races have been completed, a boat’s series score will be the total of her race scores.  This modifies RRS A2.1.

17.2 One race will constitute a regatta.

17.3 A boat scored TLE will receive points equal to the number of finishers of the race plus two points.  This changes RRSs A4.2 and A5.

18.1 All boats are required to check in with the designated race committee boat prior to the warning signal of the first race after leaving shore.

18.2 A boat that retires from a race shall notify the race committee as soon as possible.

18.3 All competitors shall wear a US Coast Guard approved life jacket at all times while on the water except for brief times when changing into or out of sailing gear. Failure to do so shall result in disqualification.  Only the Race Committee shall be able to protest a competitor for violation of this Rule. This modifies RRS 40.

Competitors participate in this regatta entirely at their own risk. See RRS 4, Decision to Race. The Organizing Authority or the Race Committee will not accept any liability for material damage or personal injury or death sustained in conjunction with or prior to, during, or after the regatta.

On board radios shall monitor only channel WX and transmit only on channels 9 and 16 while on the water.  Except in an emergency, a boat shall neither make radio transmissions while racing nor receive radio communications not available to all boats.  This restriction also applies to mobile telephones.

21.1 Team leaders, coaches and other support personnel shall stay outside areas where boats are racing from the time of the preparatory signal for the start until all boats have finished or retired or the Race Committee signals a postponement, general recall or abandonment.

21.2 Team leaders, coaches or other support personnel may not communicate in any way with a competitor from the time of the preparatory signal for the start until all boats have finished or retired or the Race Committee signals a postponement, general recall or abandonment.

2.  The sequence in which marks are to be rounded (substitute G for 3 when a gate is in use) is as follows: 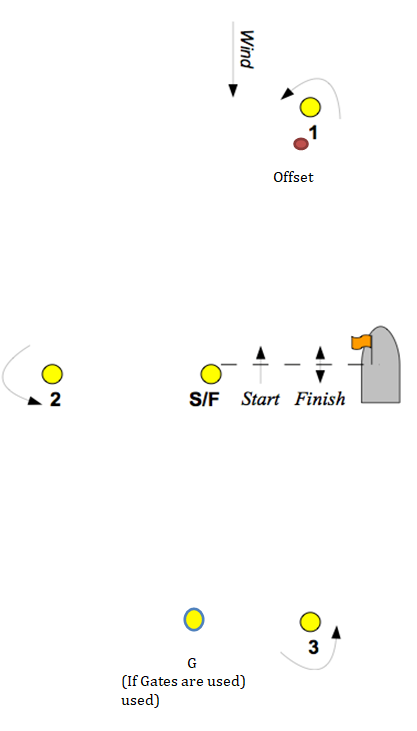